Since I published the restoration of the G.H. Elliott water colour "Mountain Mists" I have been approached by the owner of a beautiful river scene painted by Elliott in 1885.
Like the one I restored the frame is dilapidated but in the case of this painting, (also mounted on board with gum arabic) it is in remarkably good condition.
For the sake of documentation I have decided to publish an image of this painting on my blog.
I wonder how many more there are out there? 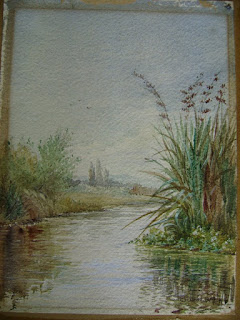 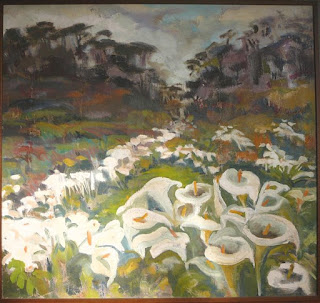 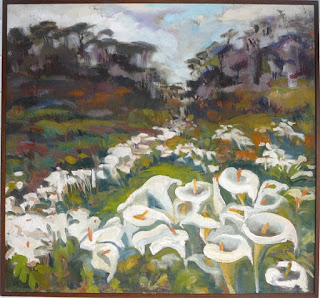 Valley of lilies: by Yvonne Rust. Acrylic on linen and oil tempered hardboard, 93 x 88 cm.
After restoration by Harmen Hielkema. 18th August 2008
at August 17, 2008 No comments: Links to this post 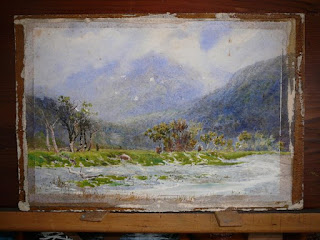 I believe this painting to be the work of a very competent landscape water colourist and one of significance to the history of art and artists of New Zealand. (Refer to the dossier of print derived from various sources from the internet relating to G.H. Elliot & the Canterbury School of Art of which he was director from 1886 to 1905).

The painting at the time of writing, so far as can be ascertained, has been in the possession of descendants of G.H. Elliot continuously until it was uplifted by Fran who sought me out & instructed me to carry out the restoration work. The painting came to me in dilapidated condition with all the component parts separated.

Gilt frame:
Badly chipped at the corners and on the relief moldings with several sections of the decorative gilded surface missing. All miter joints had started. 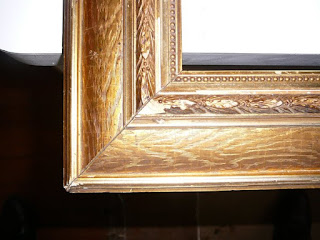 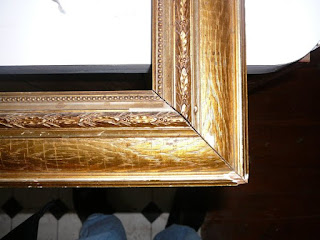 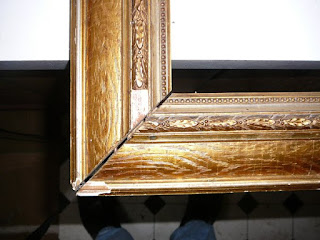 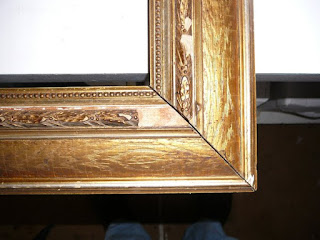 Removed several large nails from frame rebate.
All joints thoroughly cleaned. Frame was re glued with aliphatic PVA resin and clamped. All old steel corner fastenings were examined and left in place to avoid further damage to delicate composition detail.

A cast was taken from an undamaged section of the frame relief with dental algenate and a new section was cast in the impression with a polyester resin filler.
The missing sections were replaced with new, fitted inserts. Small saw cuts were made into the edges of the damaged corners and inserts of timber were glued in to rebuild the corners to a neat , sharp external right angle. The repairs were primed and resurfaced with spirit based antique gold metallic paint. Much of the surface paint was damaged past touch up level so the decision was taken to refinish the whole frame.

Glass cleaned, Matt board cleaned with moist tissues and repaired with gesso filler. All blemishes retouched with appropriate white paint.


Painting:
The decision was taken to clean the painting in accordance with a procedure described by conservator Christine Smith from her paper published by the American Institute for Conservation, Volume 17, 1998.
“Inpainting/overpainting paper art using mixed dry pigments & complimentary colours”

Before repair showing foxing, moisture damage, abrasion/gouging to paper and insect damage. Please note the deeper colouration around the image, this being the result of acid foxing and protection from sunlight by the matt board. The matt has been poorly repainted at some time since its original framing. There is a vertical “cut in” line of white paint evident on the right and left of the image which is untreatable. 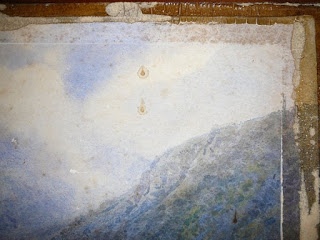 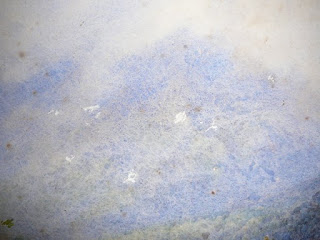 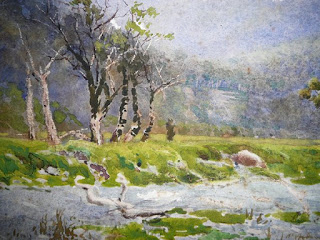 Cleaning was achieved by finely grating a pencil eraser over the entire surface of the work, which was then gently rubbed over the painting with a soft brush, lifting loose dust and contaminants from the paint surface & considerably revealing the pigment colours and generally improving the appearance of the work.

After cleaning pigment powders were prepared from high quality pastels ground by blade on a glass surface. Watercolour paints were generally of the dried cake variety at the time of painting and I made an educated guess at the likely colours used by Elliott from such a palette. The pigments were mixed to match each area of damage and applied with the use of a selection dentists “points.”

Areas of damaged paper were carefully in-filled and over-painted using dry pigment only. All obtrusive foxing marks were disguised in the same manner. 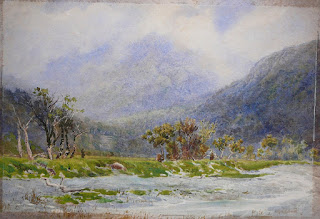 After conservation treatment. (click on image for detailed view).

All processes were chosen for reversibility should the work be subject to further conservation treatment in the future.

Every care was taken to retain the original qualities, colours, details and composition of the original work.


Details of the repaired frame. 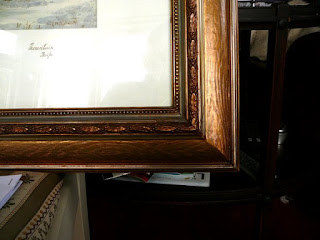 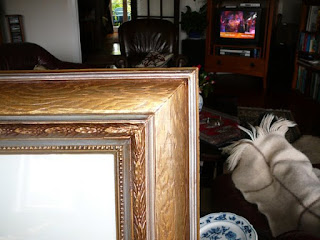 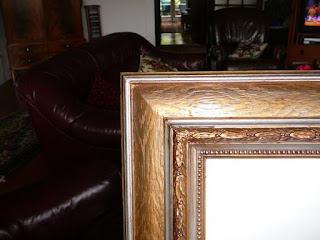 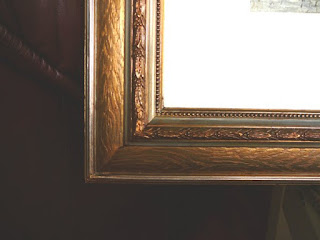 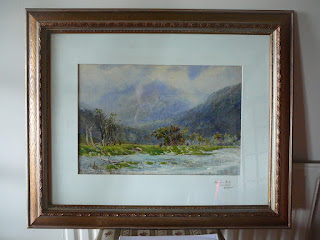 The Elliott painting back in its frame.
The decision was made to follow contemporary archival practice in the replacement of the painting back into the refurbished frame.

At re assembly it was found that the glass no longer fitted the rebate of the repaired frame by an excess of 2 mm. It is assumed that the glass was cut to fit the frame at a time when the miter joints were partially separated later in the life of the painting. A correctly fitting replacement 3mm glass panel was the only practical solution.

A narrow length of double-sided tape was laid onto the back of the glass around the perimeter. Four strips of mylar were cut and fitted onto the back of the glass surface, overlapping the edges & secured by the tape. Once assembled the tape and mylar are obscured by the rebate of the picture frame. The mylar strips were folded back to create an envelope. As the glass was placed into the rebate, into the envelope was placed the mat board, cardboard positioning strips, painting, acid free backing sheet and backing card in a sandwich. Finally the protruding mylar strips were folded over and taped down to the backing card thereby sealing the painting, behind its mat board, airtight against the glass. The enveloped sandwich was then secured with small plated nails in the traditional manner and taped over with framing tape.

The finished result is not without its blemishes however the evident damage has been minimized to the naked eye. The dry pigment repairs to the painting can be seen in raking light on close inspection. The frame, though not sporting its original finish (because of the extensive damage and marking) is as like to the original as could reasonably be achieved within the scope of this restoration.

The following signs are next to each other in line down Beaumont Street near the entrance to Westhaven Boat Marina.
All these signs have lasted through 15 years, a long time in this industry & in this city! (Auckland) Testament to my philosophy that quality workmanship is appreciated and valued.
They are only a fraction of the work that I have been involved in, some of it simply escaped without being recorded, still more will appear in due course.
I wish to acknowledge the people with whom I had the pleasure of working during my time as a sign writer and mural painter, the team at Signing On, particularly Ross, Tom & Joy Hall, Mike Tolley, Dylan & Damien Lee, Chris Verral, Canon Smith, Al (Bundy) Wier, Mike Stoneyman, Mark James, Anthony Gray & Jimmy Z; couldn't have done it without you! 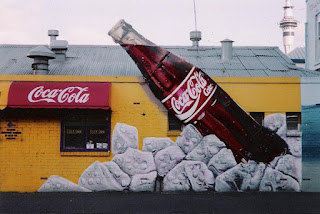 Starting with the big plywood Coke bottle on the side of the lunch bar, 1992: I took this photo in 2005 and it still looks fresh!
I painted this large installation with automotive lacquer after cutting out the form from 6 sheets of 8'x 4' plywood. The ice cubes are partly painted onto the building and some are also from plywood. The blue sign emerging from the right side of this photo is the next sign job featured... 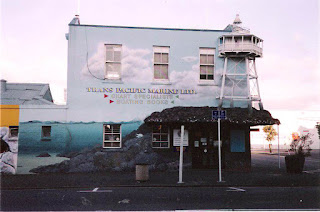 Bean Rock Lighthouse: 1992, also still there in 2005 and looking good!
This was something of a team effort on account of its size.
I painted the blend on the building, water, clouds etc with and automotive spray gun and acrylic paint. With Chris Verral, I built a fiberglass awning in the shape of a reef complete with marine life. The lighthouse was built by my colleague Julian Pirie and me. It's a 1/4 scale replica of an historic wooden light house marking a reef at the entrance to Auckland harbour.
Mural details follow... 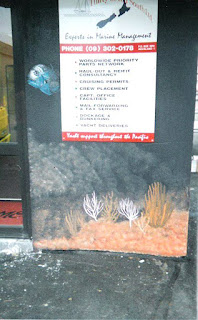 Schnapper appearing from around the back of the sign. 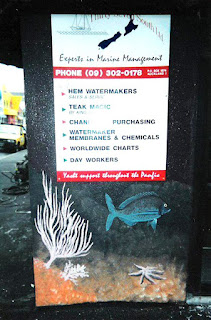 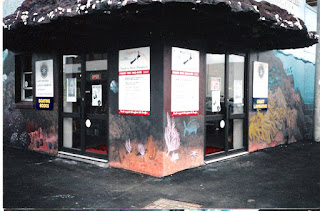 The reef and shop front awning. 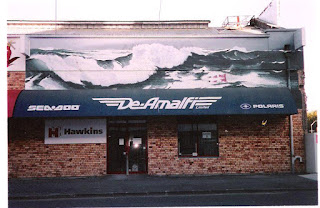 The next shop on the block 1992: Large Mural of storm waves for a marine rescue supply shop.
acrylic house paint on to brick, one of the most difficult of all substrates.
Photo 2005. 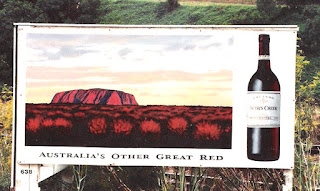 Ayers Rock for jacob's Creek wines. 1989.
Before computers and printers dominated the outdoor graphics industry I had to paint these by hand. I painted 10 of these 3 x 10 meter bill boards with very volatile etching inks onto PVC fabric using a combination of airbrush, spray gun and sea sponge. 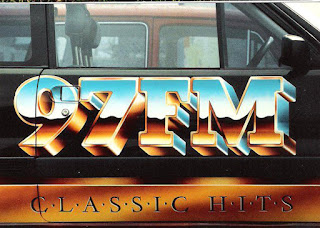 Graphics on a fleet of 10 vehicles for a local radio station, 1989. Airbrushed on to JAC decal transfer vinyl with automotive acrylic lacquer. 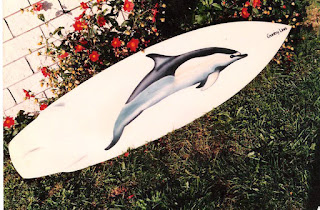 Portraits, drawings and painting. A selection of the hundreds of portraits and other works made by me over the years. Many others are unrecorded and hang on the walls of homes of friends and family around the world.

To discuss commissioning me to create a unique original for you, please feel free to contact me: Harmen Hielkema. kaurispring@xtra.co.nz. Ph.+66494057855 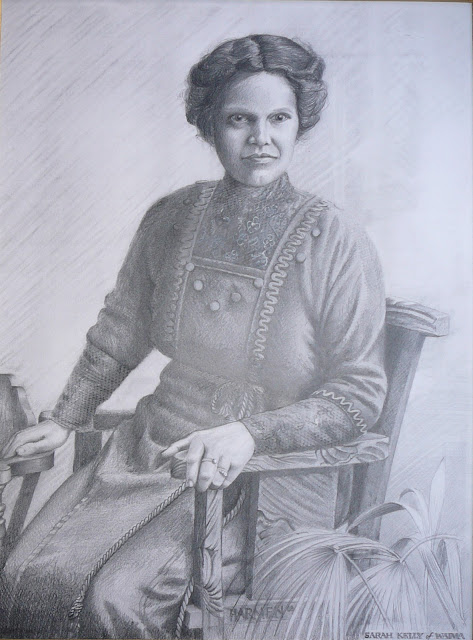 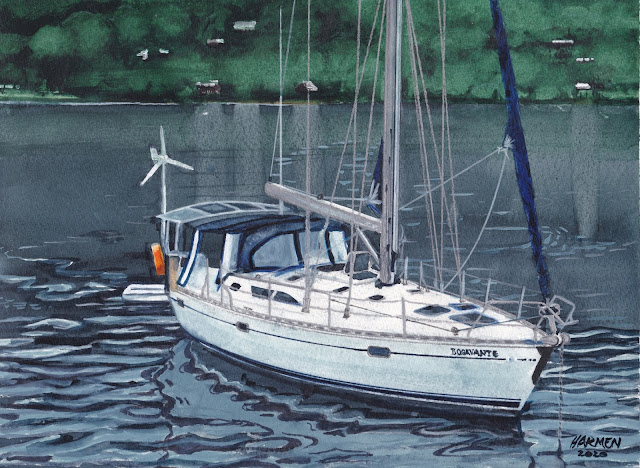